Our brand new choir by the sea opened it’s doors for the first time on Monday Aug 20th. Choir manager Alex reports back on the very beginnings of a wonderful project in the city…

“We gathered, we sang, we chatted, we ate some gorgeous food!”

It turned 6:30pm, doors opened and we welcomed three people into the venue who stayed and sang with us all night. By the end of the session there was such a fantastic buzz about the whole group. The music we made sounded simply spectacular – hard to believe this was the first time singing together. Choir director, Freya, led the group through some absolutely stonking classics, such as Lean on Me by Bill Withers, 20th Century Boy by T Rex, and Happy Together by The Turtles.

Our fantastic team of volunteers helped the rehearsal run smoothly, manning the tea station, going out and about letting people know the choir was on and providing that first welcome when people came in through the door; and of course not forgetting the brave volunteers who took on the role of being the first in the kitchen, cheffing the hot dinner after rehearsal! The choir’s musical backbone was provided by the amazing music volunteer crew, shaking the rafters of the building with their singing and piano playing skills!

We were also visited during the night by four people from the homeless community who, for various reasons, didn’t stay for the whole rehearsal, but really appreciated us being there. Three men arrived together – they did not know the choir was happening, but saw the doors open and came in. They sat quietly, listening to the singing while having a cup of tea. It turned out that their friend had recently passed away and they’d come to remember him. One of them said to me before they left that listening to the choir singing ‘Lean on Me’ had made it feel special.

Another young man came to the door and had a chat with us. He’d arrived in Brighton that week and had lost his passport, so we helped point him in the direction of some support services which he didn’t know about – he said he felt very lucky to have bumped into us, and if he is still in Brighton next week, will come back.

I think these type of moments will happen over the weeks, and they illustrate the wider –if subtle- positive impact we can have on this community simply by being there, being open, and having no agenda beyond providing a space for people to come and be, and join in as and when they are ready.

After the mighty singing, we had a mighty meal – a beautiful three bean chili. What a brilliant feeling it was to all be sat together chatting and sharing food after taking part in such an uplifting singing session! 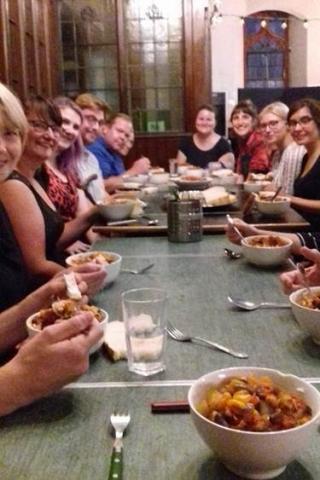 Many thanks to everyone who came along, members and volunteers - this is just the beginning. As the weeks go by, I feel very confident that we’ll see more and more members gradually coming through the doors. Remember, the London choir started with just four members back in 2008, and now, it’s a superchoir of over 60! This is the start of something very special, so watch this space, Brighton!

If you or someone you know has experienced homelessless in Brighton, you can find out information about how to join the choir HERE